Regular hexagon patio blocks of area 1 are used to outline the garden shown, with n=5 blocks on each side placed edge to edge.

If n=202, then what is the area of the garden enclosed by the path? 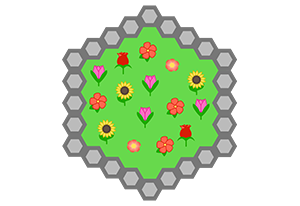 When n=5, the blocks enclose 37 hexagons of equal area to each of the tiles of area 1, and so the area of the garden is 37. 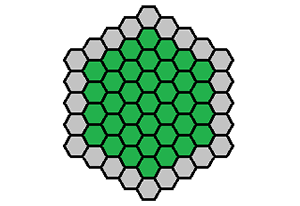 This pattern can be extended for any hexagonal arrangement, which means that a hexagonal garden with a side of s is made up of s3-(s-1)3 blocks. Since the length of the side of the garden is one less than n, the hexagonal area enclosed by n blocks each side is A=(n-1)3-(n-2)3.

An ant named Honey is kept outside a solid cube on a leash, which extends to twice the side length of the cube.

The leash can be attached

Which choice gives Honey the greatest area to roam? 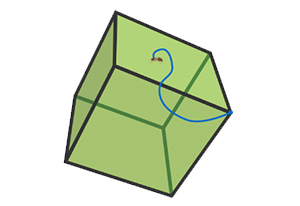 Below are 2D nets of the cube. On the left the leash is attached to the center of a face, in the middle it's on the midpoint of an edge and on the right it's on a vertex.

All of the points inside of the circle can be reached.

When the leash is attached on the center of a face, the entire cube can be reached. This might sound strange, because a section of the overview above is outside the circle. These points can still be reached by either traveling to the left, up or down.

When the leash is attached to either the midpoint of an edge or a vertex, there are a few red segment in the overviews that can't get reached. Trying to approach the points from a different angle, as described above, can reduce the amount of unreachable segments more, but it won't become 0.

The leash attach point that gives the greatest area to roam is the center of a face.

What's the minimum number of straight cuts required to cut a circle into 7 regions of equal area?

There are a number of ways to do this with 4 cuts. Here’s one example: 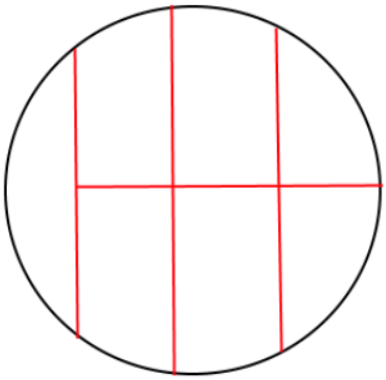 The first vertical cut cut contains 1/7 of the pizza (to the left), while the other two vertical cuts create 3 regions of 2/7 of the pizza, which are then bisected by the horizontal cut. Can you find other examples with 4 cuts?

On the other hand, this is impossible to do with 3 (or fewer) cuts. as that would require 3 chords each having an area of 3/7 of the whole pizza cutting each other into thirds, or 6 pieces with a crust and 1 in the center. For reasons of symmetry, the chords will have to be at 60 degrees apart, which uniquely determines the unequal areas of the regions, as shown below. 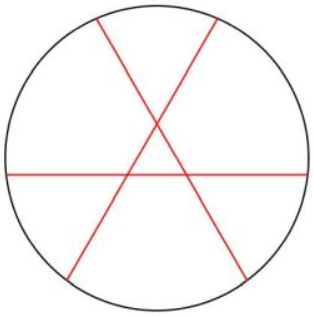 The area of the whole rectangle is 160 and the area in red is 12. What is the area in green?

Problem by An Pham
Solution by Venkatachalam J

Magnus, Garry, and Fabiano are playing in a badminton event. In this event, after two players face off for a set, the winner stays on the court to play the player who was sitting out.

At the end of the event, Magnus played 9 sets, Garry played 14 sets, and Fabiano played 15 sets.

Since each set involves two players, the total number of sets played will be the sum of the sets played by each player divided by 2, which is 19.

Now no player can sit out more than one set in a row, so with 19 sets played, the fewest sets a player can be involved in is 9, which can only occur if such a player is involved in every other set starting from the 2nd set. As Magnus fits , we know that he is involved in only the even-numbered sets, and so Garry and Fabiano must have played the 13th set.

As seen in this diagram, we can divide the triangle into 12 smaller, congruent triangles. The inner hexagon, which has area 8, is made up of 6 of these 12 triangles, so the area of the red triangle is 8+8, or 16.