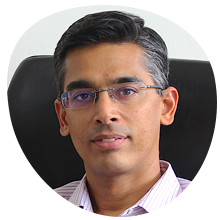 Sriram Raghavan is currently the Vice President for IBM Research AI. In this role, he has overall responsibility for IBM’s research portfolio in artificial intelligence (AI) across all thirteen of the IBM research labs across the globe. He establishes the technical and scientific agenda in AI for IBM Research and oversees the execution of this agenda across a worldwide team of several hundred IBM research scientists & engineers and a partner network of a dozen academic institutions across the globe (including the MIT-IBM Watson AI Lab). In addition, he works closely with all of the commercial divisions in IBM to transfer research AI innovations into IBM’s software and services offerings.

Prior to his current role, Sriram was the Director of the IBM Research Lab in India, the Director of the IBM Research Center in Singapore, and the CTO for IBM in India/South Asia. Over the course of three years from 2016 through 2019, he grew the India research lab into a global center of expertise in enterprise AI and blockchain. Under his leadership, the IBM research lab in India contributed many technology innovations to IBM’s AI and blockchain platforms, established strategic research partnerships in AI with leading academic institutions in India, and led numerous transformative engagements with clients across financial services, retail, and agribusiness. As CTO, Sriram represented and communicated IBM’s overall technical vision & strategy in leading forums across Asia Pacific, engaging with a variety of stakeholders — from developers and startups to clients, analysts, media, academia, and industry experts.

Prior to taking on executive leadership roles, from 2004 to 2015, Sriram established and led new research projects at the intersection of artificial intelligence (specifically natural language processing), large scale data management, business analytics, and distributed systems. He led this work for the first six years out of the IBM Almaden Research Center in San Jose, California, USA and subsequently out of the IBM Research Lab in Bangalore, India.

Sriram serves on the Technical Advisory Board of the Robert Bosch Center for Data Sciences and AI and is the research co-lead for the Columbia-IBM Center for Blockchain and Data Transparency. He is an alumnus of Stanford University, USA and the Indian Institute of Technology, Chennai, India.