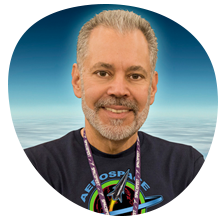 Aldo Spadoni is an MIT graduate with an aerospace engineering career spanning four decades. He contributed to the design and development of numerous advanced aircraft, missiles, and spacecraft for NASA, DARPA, the U.S. Air Force and Navy.

He began his aerospace career at Hughes Space & Communications Group as a spacecraft configuration design engineer working on the Galileo Jupiter spacecraft. Later, he joined TRW Defense & Space Systems as a navigation systems engineering specialist working on missile and spacecraft programs. Aldo joined Northrop in 1985, supporting the advanced design team in the area of advanced avionics system integration and project management. He created and managed an award-winning creative visualization team at Northrop Grumman Aerospace Systems. He is a recipient of NASA’s 2004 Turning Goals Into Reality team award for Reusable Launch Vehicle Development.

Aldo is an accomplished self-taught artist and concept designer with four U.S. patents to his credit. He is a Fellow of the International Association of Astronomical Artists (IAAA) and is currently serving as President and Chairman of the Board of Trustees. Aldo’s consulting company, Aerospace Imagineering, specializes in the conceptual design, visualization and prototyping of advanced technology products and concepts. His work has appeared in numerous magazines and television documentaries.  He has worked closely with hard science fiction authors such as Larry Niven and Jerry Pournelle to bring their technological visions to life.

As a Hollywood technical consultant and concept designer, he supported the production of Apollo 13, Supernova, Stealth, Iron Man, Iron Man 2, and other movie projects. He is currently the spacecraft technical adviser on the upcoming interstellar adventure film, Persephone. Aldo’s personal goals are to promote STEM education and create compelling and positive visions of humanity’s spacefaring future.