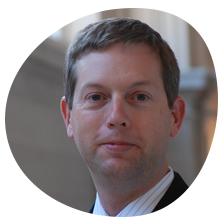 Dr. Ted Egan is the Chief Economist of the City and County of San Francisco, and directs the Office of Economic Analysis in the City Controller’s Office. The office prepares independent economic analysis of major new city legislation.

Since he joined in 2007, his office has published over 100 economic impact reports on policy issues like the minimum wage, affordable housing, business taxes, land use planning, sporting events, and short-term rentals.  During this time at the City, he has served as an expert witness on the economics of same-sex marriage, and won a Good Government award for his work redesigning the City’s business tax.  He currently serves on the Data Users Advisory Committee of the Bureau of Labor Statistics.

Before joining the City, he spent ten years working for ICF International, managing economic development strategy projects across North America, Europe, Latin America, and the Middle East. He received his Ph.D. from UC Berkeley, and lectured in the Economics and City Planning departments at Berkeley for more than ten years.