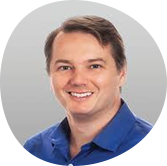 Chris has been instrumental in instigating and advancing the development of self-driving vehicles and the industry for the last 15 years.  Before founding Aurora, Chris helped build Google’s self-driving car program and served as CTO.  Prior, Chris was a faculty member of the Robotics Institute at Carnegie Mellon University where he worked with house size trucks, drove robots around in deserts, and was the technical director of the DARPA Urban and Grand Challenge teams. He earned his PhD in Robotics from Carnegie Mellon University and his BSc in computer engineering from the University of Manitoba.

A Startup's Road to
a Self-Driving Future