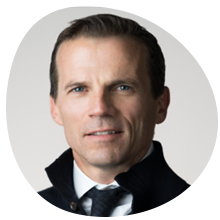 Chris is the President of McChrystal Group.   Previously, Chris was commissioned as an Officer in the United States Navy in 1997, and spent the next 15 years on US Navy SEAL Teams, leading SEAL elements in combat zones around the globe. From war-torn Kosovo, to counter-terrorism operations in Iraq and Afghanistan, to highly specialized efforts in the troubled areas of the Arabian Peninsula and North Africa, he experienced and led through the modern evolution of the US military’s Special Operations community, first on SEAL Teams Two and Eight, then in the Naval Special Warfare Development Group.

Chris was selected to serve as Aide-de-Camp to then-Lieutenant General Stanley McChrystal during General McChrystal’s final year commanding the Joint Special Operations Command (JSOC), where they served for a year together in Iraq. He witnessed first-hand the Special Operations community’s transformation into a successful, agile network.

Chris is also a Senior Fellow for National Security at New America, a Washington, DC-based non-partisan think tank dedicated to understanding the next generation of challenges facing the United States. Chris is actively involved in several non-profits dedicated to helping veterans and their families, and holds a seat on the Board of Directors for the Navy SEAL Foundation. He is also a lifetime member to the Council on Foreign Relations.

Chris earned a Master of Arts in Irregular Warfare from the Naval Postgraduate School, receiving the Pat Tillman Award for highest peer-rated Special Operations Officer in the program. His thesis work focused on the interagency collaboration and intelligence sharing processes that drove effective, cross-silo collaboration during the peak of the wars in Iraq and Afghanistan.

He is an author of the 2015 New York Times bestseller, Team of Teams: New Rules of Engagement for a Complex World as well as 2017 Wall Street Journal bestseller, One Mission: How Leaders Build a Team of Teams.

Team of Teams: A Discussion with the Authors