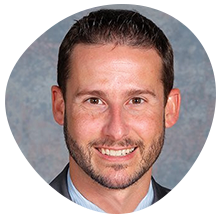 Brandon Schneider is in his 18th season with the Warriors organization and his third as chief revenue officer. In his current role, Schneider is responsible for strategic planning and execution related to all of the organization’s sales and activation efforts at Chase Center including tickets, suites, and corporate partnerships. He oversees the team’s digital and marketing teams as well as philanthropic efforts led by the community relations group and the Warriors Community Foundation where he also sits on the board. He manages the team’s retail business both online and at Chase Center, and is laser-focused on working with our team to create the best overall fan experience at Chase Center. Schneider also oversees the Warriors’ NBA G League team, the Santa Cruz Warriors, and is committed to helping the organization develop both basketball and business talent through this important arm of the organization. Prior to assuming his current position, Schneider most recently served four seasons as senior vice president, business development; two seasons as group vice president, ticket sales and services; and three seasons as vice president, ticket sales and services.

Under Schneider’s leadership the Warriors’ season ticket base has grown to a capped out level of 12,000 seats, and he spearheaded a successful renewal strategy that has resulted in a 90-percent-plus season ticket renewal rate in each of the past six seasons. The Warriors launched a Priority Wait List for season tickets prior to the 2013-14 season, and that list has grown to more than 40,000 members who are committed to purchasing season tickets if/when they become available. He pushed the organization to successfully adopt a dynamic ticket pricing model prior to the 2011-12 campaign, and mirrored the innovative model on the suite level shortly thereafter. He led the Warriors to a 343-game and counting sellout streak by the end of the 2018-19 season, during which the Warriors received a league leading five “best in industry” awards at the 2019 NBA Sales and Marketing Meetings.

During his tenure with the Warriors, the organization has been recognized with several prestigious awards including the Sports Business Journal’s Sports Team of the Year award in both 2014 and 2016 – the first team to win multiple times. Among his many accomplishments, the Sports Business Journal/Daily recently named Schneider to its Power Players list for 2018 after he was also honored with an exclusive Forty Under 40 award by the SBJ in 2017. These honors follow Schneider being named Forty Under 40 by Diablo Magazine in 2015, and The San Francisco Business Times in 2016.

A Bay Area native, Schneider graduated from UCLA in 2001 with a degree in business economics and an accounting minor. A die-hard fan of both the San Francisco 49ers and San Francisco Giants, and an owner of LAFC, he lives in Hillsborough with his wife Amanda and their son Tommy.