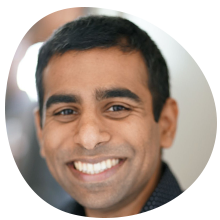 Arun Saigal is an entrepreneur and business executive. He is the co-founder and CEO of Thunkable, a drag-and-drop platform that aims to make it easier for people to create their own apps.

After graduating from M.I.T., Saigal began working for Quizlet, a mobile and web-based study app. As their lead Android developer, he built and launched the first version of Quizlet’s Android app. He worked on all aspects of the app, including the design, data layer, and syncing framework. He was also part of the team that designed Quizlet’s new API.

In January 2016, Arun Saigal and his partner WeiHua Li co-founded Thunkable, a drag-and-drop tool for people to create mobile applications. Their goal is to make it easy for anyone around the globe to build on both Android and iOS operating systems, regardless of programming experience. As of late 2017, the platform has reached 4.3 million registered users and over 13 million apps have been created.

Saigal grew up in Burlington, Massachusetts. He attended M.I.T., earning a Bachelor’s degrees in Electrical Engineering and Computer Science. In the same year, he earned his Master’s degree in the same fields with a concentration in Artificial Intelligence .

MIT and the people affiliated with it have played an incredible role in shaping my life. I discovered my passions and built the foundation for my company (Thunkable) at MIT. I met my cofounder at MIT, and many of my investors came from MIT connections. Even the symphony I now conduct (the San Francisco Civic Symphony) was introduced to me through MIT friends. Given all of this, I felt that volunteering for the MITCNC, especially around affinity circles, would be one of the best ways to encourage more MIT connections to be formed and be a way to give back to a community that has given me so much.

With affinity circles, our goal is to put on focused, repeated events around specific professional or life pursuits. We want MIT alums in the SF Bay Area to build connections with other alums who share common interests and traits. Along with my co-lead Karen, our responsibility is to make these events happen and see what works for local MIT alums and the club.

We have events in the work for groups of graduating years, (the first one we did a couple of weeks ago was a ’96 – ’06 grad year happy hour). We’re also working on a few professional series – for PMs, Eng Managers, founders, and lawyers – for both networking and mentoring. Get in touch to learn more! affinitycircles@mitcnc.org

Through the MIT Ohms, the a cappella group I started at MIT, I sang the National anthem at a Boston Celtics vs Cleveland Cavaliers game in 2013.