Member Board Of Trustees 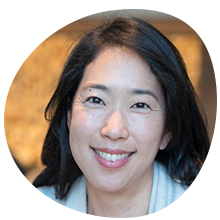 Ann Miura-Ko is a co-founding partner at FLOODGATE where her investment interests include the innovations in e-commerce, radical science, and big data. She currently sits on the boards of companies like Lyft, Ayasdi, and Inscopix, . She was previously a board member of TaskRabbit, Refinery29 and Xamarin.

In addition to serving at FLOODGATE, Ann is a lecturer in the School of Engineering at Stanford University, where she got her PhD focused on mathematical modeling of computer security.

Prior to joining FLOODGATE, Ann worked at Charles River Ventures and McKinsey and Company.

Ann grew up in Palo Alto, California (her father is a rocket scientist at NASA) and, as a result, was exposed at an early age to the world of startups, technology and venture capital. She developed an early passion for robotics and went on to major in electrical engineering at Yale University where she received her BS degree. For her senior project, she was part of a five person team that designed four robots to autonomously play soccer which competed at the Robocup competition in Paris, France. She lives in Menlo Park with her husband and three kids.