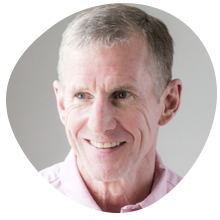 Stan McChrystal is a retired four-star general, Stan is the former commander of US and International Security Assistance Forces (ISAF) Afghanistan and the former commander of the nation’s premier military counter-terrorism force, Joint Special Operations Command (JSOC). He is best known for developing and implementing a comprehensive counterinsurgency strategy in Afghanistan, and for creating a cohesive counter-terrorism organization that revolutionized the interagency operating culture.

Stan McChrystal founded McChrystal Group in January 2011 to deliver innovative leadership solutions to businesses globally in order to help them transform and succeed in challenging, dynamic environments. As Founder and a CEO, he advises senior executives at multinational corporations on navigating complex change and building stronger teams.

Throughout his military career, Stan commanded a number of elite organizations, including the 75th Ranger Regiment. After 9/11 until his retirement in 2010, he spent more than 6 years deployed to combat in a variety of leadership positions. In June 2009, the President of the United States and the Secretary General of NATO appointed him to be the Commander of US Forces Afghanistan and NATO ISAF. His command included more than 150,000 troops from 45 allied countries. On August 1, 2010 he retired from the US Army.

Stan is a senior fellow at Yale University’s Jackson Institute for Global Affairs, where he teaches a course on Leadership. He has over the past 10 years sat on the boards of Navistar International Corporation, Siemens Government Technology, Fiscal Note and JetBlue Airways. He is a sought-after speaker, giving speeches on leadership to organizations around the country. In 2013, Stan published his memoir, My Share of the Task, which was a New York Times bestseller; and is an author of Team of Teams: New Rules of Engagement for a Complex World, which was a New York Times bestseller in 2015. Stan also co-authored Leaders: Myth and Reality, a Wall Street Journal Bestseller based on the epochal Parallel Lives by Plutarch.

Team of Teams: A Discussion with the Authors