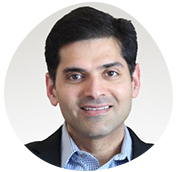 Rehan Jalil is the CEO of Securiti.AI, Venture Advisor at Mayfield Fund and an investor and mentor to many Silicon Valley startups. He was the SVP and GM for Cloud Security at Symantec. His products became the fastest growing across Symantec for eight quarters in a row.

Rehan came into Symantec with $4.7B acquisition of Bluecoat. He came into BlueCoat via the $280M merger of Elastica, that he founded and ran as CEO. Elastica innovated CASB as a category and drove it to become an important cybersecurity need. Prior to that he was founder and chief executive officer of WiChours, an innovator in deep packet inspection centered packet core, which was used to deploy some of the earliest 4G networks. WiChorus was acquired by Tellabs for $180M. Previously, he was Chief Architect at Aperto and helped innovate multicore processors at Sun Microsystems. He was name Ernst & Young Entrepreneur finalist in 2010 and Top 25 Disruptor in 2015.

He holds an AMP from Harvard Business School, an MSEE from Purdue University and a BS from NED University.