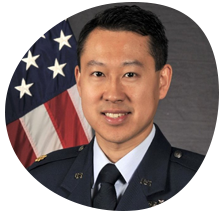 Major Kevin Liu (SB ’08, Course 16, Aerospace Engineering) is a first-generation Chinese-American and US Air Force officer. He is currently at the Air Command and Staff College’s Joint All Domain Strategist program which specializes in developing future leaders to counter emerging national security challenges.

Kevin has served in various positions in Europe, the Middle East, and Asia. He is an Air Battle Manager, with over 1,600 flight hours in the E-3 AWACS aircraft, including more than 800 combat hours. Prior to his current assignment, he was selected for the DARPA Service Chiefs Fellows Program and served as the Executive Officer for the Air Force’s largest combat wing.