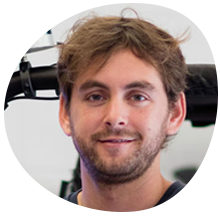 Jesse Levinson is the co-founder and CTO of Zoox, a venture-backed startup creating ground-up, fully autonomous electric vehicles for point-to-point mobility in cities. Jesse is responsible for overseeing the company’s software, artificial intelligence, computing, and sensing platforms. Prior to Zoox, Jesse graduated summa cum laude from Princeton and then completed a computer science Ph.D. and postdoc under Sebastian Thrun at Stanford. There, he developed algorithms for Stanford’s $1M-winning entry in the 2007 DARPA Urban Challenge and went on to lead the self-driving car team’s research efforts. Jesse also co-created a popular mobile photography app, Pro HDR, that has been purchased by more than a million people.