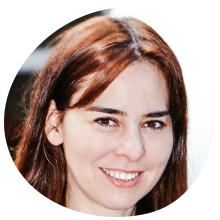 Dina Katabi is the Andrew and Erna Viterbi Professor of Electrical Engineering and Computer Science at MIT and the director of the MIT Wireless Center.

In 2003, Katabi joined MIT, where she currently holds the title of Professor in the Department of Electrical Engineering and Computer Science. She is the co-director of the MIT Center for Wireless Networks and Mobile Computing and a principal investigator at the Computer Science and Artificial Intelligence Laboratory.

Katabi won the Grace Murray Hopper Award in 2013, recognizing her as the outstanding young computer science professional. In 2012, her work on Sparse Fourier Transforms was chosen as one of the top 10 breakthroughs of the year by Technology Review. She was awarded the ACM Prize in Computing, “recognizing her as one of the most innovative researchers in the field of networking, Katabi applies methods from communication theory, signal processing, and machine learning to solve problems in wireless networking”.

Katabi received a bachelor’s degree from the University of Damascus in 1995 and S.M and Ph.D. in Computer Science from MIT in 1998 and 2003 respectively.