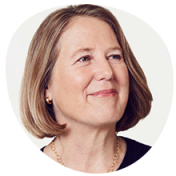 Diane B. Greene  is an American investor and an Alphabet board of directors member, and was a founder and the CEO of VMware from 1998 until 2008. She served as the CEO of Google’s cloud businesses from 2015 until early 2019.

At the age of 19, Greene organized the first Windsurfing World Championship and won the national women’s dinghy championship in 1976. She worked as an engineer and manager at Sybase, Tandem Computers, and Silicon Graphics, and then some start-up companies.

In  2015, Greene was named the senior vice president for Google’s cloud businesses, following the acquisition of her startup, Bebop.

She featured as a protagonist of (Linkedin co-founder) Reid Hoffman’s “Masters of Scale” podcast series, among other successful businesspeople such as Mark Zuckerberg, John Elkann, and Brian Chesky. In this interview, she discussed the strategy VMware adopted in order to scale.

Greene was succeeded as CEO of Google Cloud by Thomas Kurian in early 2019. She retained a seat on the board of Alphabet.

On April 30, 2019, Alphabet announced that Diane Greene won’t be seeking re-election to the Board at the expiration of her current term on June 19, 2019.