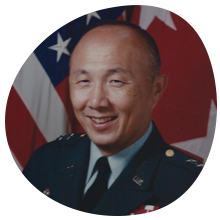 Bill Chen is a third-generation Chinese American.  He served as a career U.S. Army officer for over 32 years and retired as a Major General in 1993 — the first Chinese American to wear 2-star rank in the U.S. Army.  As a Major General he commanded the U.S. Army Missile Command during Operation Desert Shield/Desert Storm, the Army’s largest deployment and subsequent combat use of Army missiles in history.  Later, Bill served as the Army’s first Program Executive Officer for Missile Defense – directing all the Army’s missile defense programs.  After his military retirement, he worked for United Defense, Inc. as VP & program director and VP engineering; and for BAE Systems, Inc. as VP & general manager of a joint venture U.S. – Turkey company that specialized in the development and manufacturing of combat vehicles.

Bill is editor in chief of the newly released book, Unsung Heroes: Recognizing and Honoring Chinese American World War II Veterans – Congressional Gold Medal Recipients. Bill received a B.S.E. in Engineering Mathematics and M.S.E. in Aeronautical & Astronautical Engineering, both from the University of Michigan; and an M.B.A. from Auburn University.  Currently retired, he resides in Belmont, MA.  His son, William, is MIT Class of 2004, S.B. in Computer Science and Engineering.