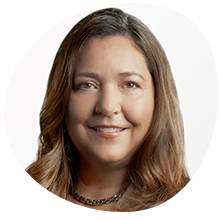 Anna is the Founder and Managing Partner at Gradient Ventures, overseeing the fund’s global activities.

Anna is an accomplished leader in the field of artificial intelligence, is a serial entrepreneur, and has a long history at Google. Prior to starting Gradient Ventures, Anna was Google’s Vice President of Engineering in AI – integrating AI into products across Google. She also serves on the Board of Directors at Square Inc.

Early in her career at Google, she helped launch and scale Android to over a billion phones, launched Google Play, and led the search, infrastructure, recommendations horizontals. Anna was the principal architect and inventor of TeraGoogle, Google’s search serving system, which increased the index size over 10X at the time of launch. She also helped lead search ranking efforts through Google’s IPO to determine the top ten search results.

Anna received her PhD in Computer Science from the University of Illinois Champaign-Urbana then became a Research Scientist at Stanford University in Artificial Intelligence, where she worked with one of the founders of AI, John McCarthy, and his wife Carolyn Talcott.