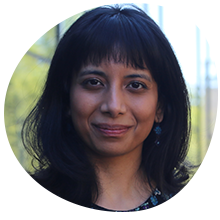 Animashree (Anima) Anandkumar is a Bren professor at Caltech CMS department and a director of machine learning research at NVIDIA. Her research spans both theoretical and practical aspects of large-scale machine learning. In particular, she has spearheaded research in tensor-algebraic methods, non-convex optimization, probabilistic models and deep learning. Until recently, she was a principal scientist at Amazon Web Service, where she has enabled machine learning on the cloud infrastructure.

Anima is the recipient of several awards and honors such as the Bren named chair professorship at Caltech, Alfred. P. Sloan Fellowship, Young investigator awards from the Air Force and Army research offices, Faculty fellowships from Microsoft, Google and Adobe, and several best paper awards. She was recently nominated to the World Economic Forum’s Expert Network consisting of leading experts from academia, business, government, and the media. She has been featured in documentaries by PBS, KPCC, wired magazine, and in articles by MIT Technology review, Forbes, Yourstory, O’Reilly media, and so on. At Caltech, she is the co-director of the center for Decision Making, Optimization and Learning (DOLCIT) and is on the scientific advisory committee for the Center for Autonomous Systems and Technologies (CAST).

Anima has worked to democratize AI, promote ethical use and improve diversity and inclusion in AI. She was awarded the good tech award 2018 by NYTimes for her efforts.